Earlier this week, the Canadian Prime Minister Justin Trudeau and his wife Sophie Gregoire were kayaking in the Gulf Islands National Park in Sindey, British Columbia when they ran into a newlywed couple that was celebrating nearby. Of course, when the couple saw the Prime Minister, they cruised over to say hello to the Trudeaus and even asked for a picture. Trudeau obliged and even gave the new bride two kisses on the cheek. 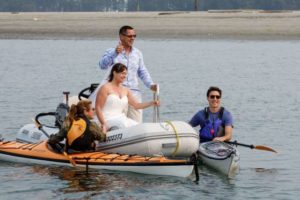 The newlyweds were Heiner and Michelloe Gruetzner, and according to them, the Prime Minister mentioned that he would not be taking his shirt off this time. This was in reference to the infamous incidents where the Prime Minister was often caught without a shirt on. Last summer, the Prime Minister was even photographed shirtless in a wedding. The pictures have since gone viral. But Trudeau said that this time, he would be keeping his shirt on. Earlier in June, Trudeau tried to explain to Kelly Rippa and Ryan Seacrest why he always seems to have his shirt off when photographed. He explained that he often wears little on hot days that he spends with his family. 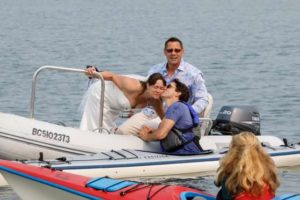