Earlier this week, a custodian in Alabama was called in to clean up a mess. The custodian quickly responded and entered the gymnasium where the accident occurred, only to find a surprise party that was thrown just for him. The pictures and video of the surprise party soon spread on social media, where the story quickly went viral. 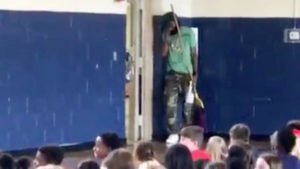 The custodian, named Mr. Eugene, was a custodian at the Moody Elementary School in Alabama. He was called in because a student had apparently peed his pants during an assembly in the gym. “I’m so sorry! A student had an accident, can you help us clean it up?” a teacher said to Mr. Eugene in the video. Little did he know that there was surprise waiting for him. 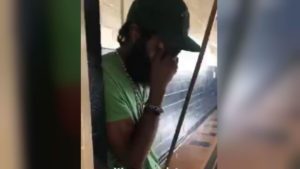 When Mr. Eugene walked into the gymnasium, he was met with students cheering for him and holding signs in support. It took a while for Mr. Eugene to realize what was happening but when he did, he was immediately overcome by emotion and he was at the verge of breaking down in tears. The surprise was to celebrate Mr. Eugene on National Custodial Workers Day. Most of the teachers and students planned the surprise to honor and celebrate their very own custodian who has been with the school for several years.

“I totally lost it,” Mr. Eugene said in an Interview with ABC, “I wasn’t expecting that at all. I was expecting something much worst.Â  It made me feel real appreciated,” he added. “It was a total shock. I love these guys.”