Queen Elizabeth of England is known for making most of her public appearances with the traditional look of formal wear with a hat and a small handbag. So it does not come as much as a surprise that in one of the many royal portraits, one of the most popular accessories of the Queen made a cameo appearance. The handbag that was immortalized in the portrait was one of her many iconic Launer London handbags. 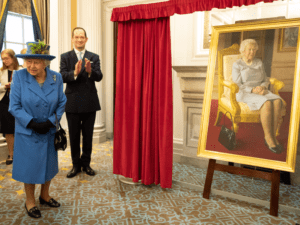 The portrait was commissioned in honor of the Royal Air Force Club’s 100th anniversary. And the portrait of the monarch featured the patented leather purse at the feet of Queen Elizabeth. The portrait was done by award-winning artist Ben Sullivan, and depicts the monarch in her periwinkle outfit sitting in the White Drawing Room of Windsor Castle.

“The Queen unveils a new portrait that was commissioned to celebrate 100 years of @TheRAFClub. Started in February 2018 and set in the White Drawing Room of Windsor Castle, the portrait was painted by Benjamin Sullivan â€“ who won the BP Portrait Award in 2017.” 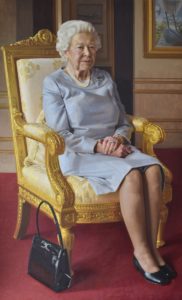 The portrait includes several Royal Air Force elements to honor them. These elements include a background that has a Spitfire from the 253rd Squadron. There is also an image that is a portion of “Hurricanes in Flight” by Eric Ravilous. Coincidentally, Sullivan’s grandfather LT JM Sullivan, flew over Albania during WW2 on a Spitfire.

“It was almost happenstance that it was placed there but it gives some idea there’s actually a person as well as a figurehead – it’s personal. It’s where she put it, and I thought I could take it out, but then I thought – actually it’s quite a nice thing, a personal thing,” said Sullivan.