An incident at the Xiaoloan railway station in the Guangdong Province in China involved a little boy that had accidentally crawled through an X-ray machine. According to reports, a father and his son were trying to go through security checks at the station when the father went ahead of his child. The boy wanted to follow and managed to evade the staff of the station and climbed into the X-ray machine. 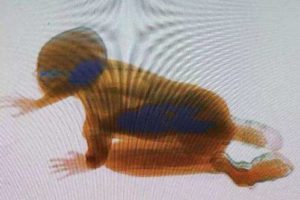 Surveillance footage of the incident was shared through the internet, and it eventually spread on social media, where it quickly went viral. The video shows the father realizing that his son was not with him. After a few seconds the boy reemerged from the exit of the X-ray machine and into the conveyor belt when the security personnel stopped the machines.

The father and his son then had a short talk with the security team at the gate before they left without any issues. Even though the boy had gone through the X-ray machine, he seemed to be unharmed. Following the incident, the Guangzhou Railway Police issued a statement that warned parents and guardians that “when entering the station, they must take care of their children to avoid danger.” 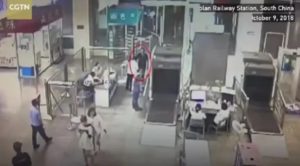 “Passengers are warned that not only is this kind of behavior forbidden, but also that the radiation from the machine is incredibly harmful to human health,” a Dongguan Railway Station spokesperson said. According to the Radiation Safety Institute of Canada, scanners at airports or train stations that use X-rays have a type of ionizing radiation that may cause cancer, but the amount is minimal and sealed.