Earlier this week, a man in Russia reportedly took a stolen tank and rammed it into a supermarket. He then got out of the tank and went through the rubble just so he could steal a bottle of wine. According to reports the armored vehicle was stolen from a motorsport training ground nearby. The thief then drove it through a forest and into Apatity, a town just south of the Arctic Circle. 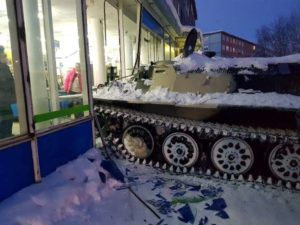 According to witnesses, the man was drunk and had a hard time turning the large tank n a narrow street. So he drove the tank and slammed it into the nearby supermarket window. Aside from the massive damage to the store, the man also crushed a Daewoo car that was parked nearby. The footage of the tank slamming into the store was shared on social media and also revealed how the man got out of the tank through its hatch, looked at the damage he had done, then went into the shop through the broken window. 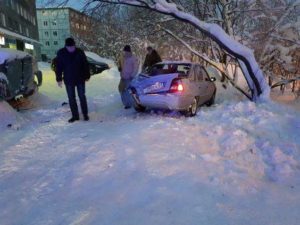 According to police reports, the man was in his late 20’s and he was later arrested in possession of a stolen bottle of wine. The thief did not resist arrest. The shop that he stole the bottle from was not licensed to sell alcohol that early in the morning. Despite the damage done to a car and the side of the building, witnesses in the footage did not seem to upset at what was happening.

“Basically some guy stole an armored vehicle… and went into a shop to top up his stocks in the morning,” said the user who posted the video.