In Maine, runner Jesse Orach was leading the TF Bank Beach to Beacon 10k race when he started to get lightheaded. He was just a few meters from the finish line but he was starting to falter. Eventually he fell down, just a few steps short of the finish line. The runner behind him, Rob Gomez, had a chance to win the race and fairly claim the $1,000 prize as the fastest male finisher. But instead Gomez stopped, helped Orach to his feet and half-carried him to the finish line where he collapsed from exhaustion. 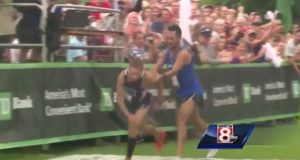 The selfless act by Gomez is the epitome of sportsmanship. The photos and videos of Gomez’s act have spread to social media. But despite all the attention, Gomez still remains humble. He says that the media has placed him in a pedestal that he does not really deserve. Gomez claims was just an example of what the running community is all about. Some have asked Gomez why he would do such an act, when the prize and the trophy was within his grasp. He says that runners just don’t do that. He says that if the reverse had occurred, Orach would have done the same for him. 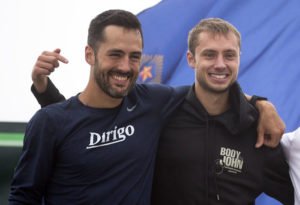 “It wasn’t a calculated decision,” said Gomez. “It wasn’t because I’m some sort of hero or some sort of special person, because I’m not. As runners, we understand, we pick each other up and help each other.” After getting some medical attention, Orach was quick to approach Gomez to thank him for the generous act at the very last steps of the race and helping him finish.