As a public speaker, one of the many risks of speaking in public is being in a spot to be heckled and jeered, especially in a forum involving politics. But for the Transport and Communications Minister of Turkey, Ahmet Arslan, he many have the distinction of being the first politician to be heckled by a robot. The minister was heckled by a robot named “Sanbot” in his recent public speech. 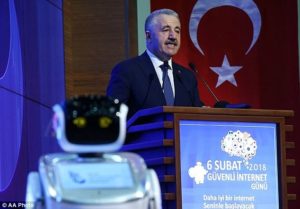 Arskan was on stage to give an address in Akara to mark Safer Internet Day when he was loudly interrupted and jeered by a small robot, who was also a guest on the stage. The minister was giving a speech on the importance of a secure internet source, when he was rudely interrupted from an unlike source, the robot that was onstage with him.

“Speak slowly! I don’t understand what you are saying! What are you talking about?” the robot asked Arslan. The minister took it all in stride even when the audience burst into laughter when they realized the heckling came from the robot. Arslan kept his humor despite being obviously irritated. He simply told the handlers of Sanbot to deal with the situation. 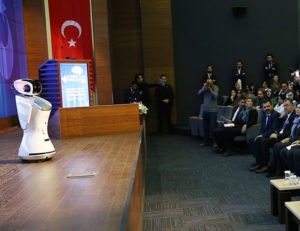 “Dear friends, it seems clear that the robot needs to be put under control, please can whoever is in charge do what is necessary!” he said. The robot was then muted and the minister continued with his speech. Turkish media reported that Sanbot was then formatted after the entire speech debacle. It’s not clear when Sanbot will next appear, but one thing is for sure, he won’t be sharing the stage with Arslan again.