A professor at the Central Michigan University recently shared the story of how she discovered a 22.5-pound rock that was used as a doorstop for more than 30 years. The rock was made up of something from out of the world, quite literally, because it was a meteor from outer space. According to the professor, the meteorite could be worth more than $100,000. The professor was Mona Sirbescu. She says she knew the rock was special when she first saw it. 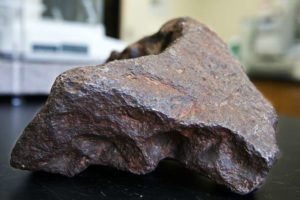 “It’s the most valuable specimen I have ever held in my life, monetarily and scientifically,” Sirbescu said in a press statement from the University. The rock was given by a man from Grand Rapids, Michigan, who wanted to remain anonymous. Rocks are very commonly submitted to Sirbescu, who is part of the department of earth and atmospheric sciences of the university. Usually it is just some strange rock or mineral that people assume is special. But this time it really was something unique. 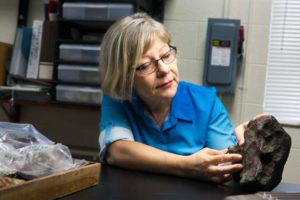 According to the anonymous man, the meteorite was passed on to him when he bought a farm in Edmore, Michigan in 1988. The previous owner of the farm told him it was a meteorite that he and his father saw falling down on their property in the 1930’s. According to Sirbescu, the man contacted her and she helped in identifying the rock as a meteorite composed of 88 percent iron and 12 percent nickel. Sirebscu sent a slice of the rock to a colleague, Dr. Catherine Corrigan, a geologist at the Smithsonian Institution in Washington, D.C, to confirm her findings.

“Just think, what I was holding is a piece of the early solar system that literally fell into our hands,” she said.