Meet Anthony Mancinelli. He has been working for a barber for most of his life. He is also known as the world’s oldest barber at the ripe old age of 107. Despite his age, Anthony says that he has no plans of slowing down. He has been working in barbershops for the past 97 years and he knows he will be doing this until he is no longer able to. 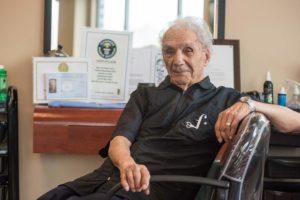 Anthony was born in 1911 in Naples, Italy. When he was 8 years old, Anthony and his family left for the United States. He arrived in New York in September 11, 1919. Anthony had an aunt living in New York and they decided to settle there. They lived in Newburgh, New York, just eight miles from New Windsor, Anthony is currently living.

When Anthony was only 10 years old, he started cutting hair. Back then, haircuts were only 25 cents. Today, he is considered to be one of the most well known and reliable employees at the barbershop. Most of the people that work there see him as an icon and someone to aspire to. When he asked about his retirement, Anthony simply brushes it off and says “Why would I?” 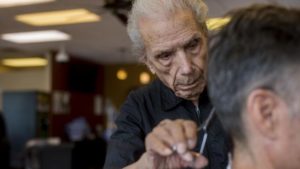 “He never calls in sick,” says Jane Dinezza, the owner of Fantastic Cuts, where Anthony works, “I have young people with knee and back problems, but he just keeps going. He can do more haircuts than a 20-year-old kid. They’re sitting there looking at their phones, texting or whatever, and he’s working.”