Farmers from Japan are now using robotic wolves to help protect their crops from boars, deer, and other pests that graze on them. Japanese farmers have long been troubled by these pests that feed on the country’s rice and chestnut crops. But thanks to a new invention called the Super Monster Wolf robot, they can now be rest assured that their crops are guarded and protected. 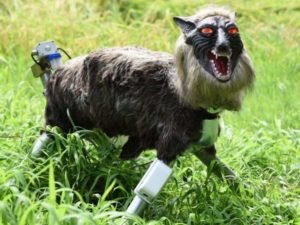 The Super Monster Wolf stands at around 50 cm and around 65 cm long. The robot runs on rechargeable solar batteries. It also features a scary wolf-like monstrous head with beaming red LED lights. The robot also features realistic fur and a menacing toothy snarl. This monster wolf robot can detect other mammals through motion-sensors and lets out an alarm in the form of a terrifying howl. The wolf is also capable of covering distances of up to half a mile. This modern scarecrow has already been used to patrol a plantation near Kisarazu City, Chiba. 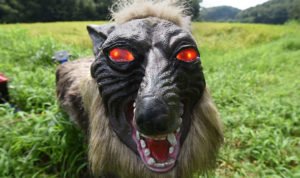 The monster robot wolf was commissioned by Chikao Umezawa of the Japan Agricultural Cooperative. He says that he has seen a significant drop in the number of crops ruined by animals since it was released. The robot wolf dog is about to enter mass production and will soon be made available for commercial use. The current retail price for the robot is around 514,000 yen or around 4,800 US dollars.

There is some basis for the wolf design. Wolves used to inhabit the islands of Japan. But sadly these wolves became extinct around the 19th century. Robotics has always been advanced in Japan, but other companies in countries such as the US and Europe is quickly catching up, especially with the development of robotic animals.