39-year old Christopher Gonzales has been struggling with making ends meet. Gonzales is a single father who unfortunately injured himself while on the job last year, and he has been struggling since then. When he couldn’t work, he decided to focus on his hobbies. But this small hobby turned into a lucrative business thanks to an unassuming tweet by his daughter. 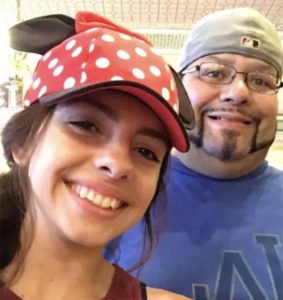 Gonzales was injured while working on a construction job. He suffered from a spinal cord nerve damage that made it hard for him to move around. The only source of income he had was a disability check he received once a month. It wasn’t enough to provide for himself and his daughter, Alexis. For the past year, Gonzales has also been working on his wood working hobby. One of his favorite things to craft has been team logos. Alexis saw his amazing work and posted them on Twitter with hopes that someone might want to buy them.

“So my dad is disabled and is trying to make a little extra money because he makes so little. He makes wood carvings [in] his free time, and he can make them any size, for anything (not just team logos). Even if you don’t like them a RT will help spread the word.”

The next day, when Alexis woke up, her twitter account had more than 7,000 direct messages. She became the de facto sales manager for her father. Now Christopher’s hobby is making him money and he is now even looking for help from his friends because of the number of requests he has received.