Earlier this week, a robot backpack was unveiled that would give the wearer an extra pair of hands. The invention was created by researchers in Japan. The robot is named Fusion and is created like a human with a head and two arms and that can be remotely controlled with the help of a headset and motion trackers. The idea is to allow two people in two different locations to work together on a singular task. 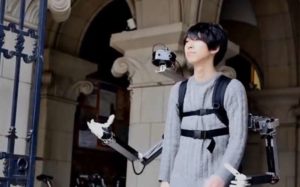 “Think of it as two people in one body,” said Yamen Saraiji, a researcher from Keio University. He worked alongside Tokyo University on the Fusion project. The robot head features a camera that allows the operation to see what the wearer is seeing in real time. There is also a microphone and audio to allow communication between the two. 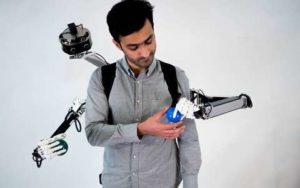 The robot arms can move independently from the wearer of the backpack and they are controlled by motion trackers that are on the remote user’s hands. The arms can also attach to the arms of the wearer using cuff straps to help guide the movements of the arms. Saraiji says that the Fusion robot could someday be used to train people in activities such as martial arts. He says it can also be used to train new employees. The device is still a prototype but the researchers believe it will be rolled out within the next few years if they get funding.

“There are still some improvements to be made,” said Saraiji, “For example, the speed of the robot itself must be increased to match human speed. The hand design of the robot could also be improved to replicate the hand of a human”.