Father and Son Bike From Canada to Coney Island for Charity

Father and son activities are very special events. It is even more special if it is done for charity and for the benefit of others. That’s exactly what this father and son duo did earlier this month. Chris Potvin and his 10-year old son James took an epic bike ride and did it for a good cause. They completed a bike ride from Canada all the way to Coney Island New York. 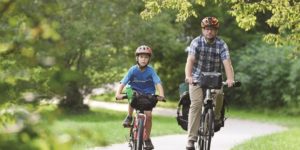 The bike ride was a made to raise money and awareness for autism. It is a cause very close to the hearts of Potvin, because James is autistic. The bike ride took 650 miles, but they were able to make it to the famed beach boardwalk in New York City with a small crowd to welcome them. James had to be outfitted with a special bike to be able to travel that far. But it was all worth it because he was able to spend so much time with his dad and raise so much money for the cause.

“It was a great ride,” Chris Potvin said. “It was so much time on the road, but it was a lot of fun and we felt like we did a lot of good for the community.” Chris and James also raised thousands more in similar fashion last year, but it was a much shorter ride in Canada. Autism is one of the fastest growing disorders in the world. It affects 1 in 59 children and 1 in 37 little boys. There is still a lot to learn about autism and how it can be treated and possibly even prevented.