Earlier this week, Baboons at a British Zoo were filmed apparently flossing their teeth. They were doing this with broom bristles and even hairs from other baboons in their group. Among the baboons that were filmed flossing was an adult baboon and a younger one. They were showing remarkable behavior at the Paignton Zoo Environmental Park. The video was taken by an animal behavior student named Charlotte Morgan from the University of Exeter. 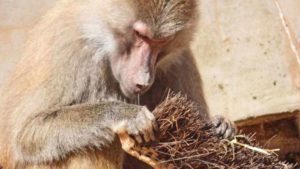 “Past research at the zoo found that certain baboons floss using their own hair and bristles from broom heads.” said Morgan, “I have observed cases where baboons will pluck hair off other baboons to floss, which is pretty exciting.”

The baboons were first seen flossing at the zoo a few years ago, when a female baboon was seen using the bristle from an old broom to floss her teeth. Studies have shown that primates that floss their teeth do so for social and hygienic purposes. Morgan has been researching whether personality is related to the flossing activities in the troop of baboons. 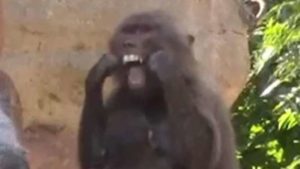 “There does appear to be a relationship between certain personality traits and dental flossing”. Says Morgan, “From what I have observed, they start off by grooming themselves and then they pluck off their own hair and place it between their teeth. With the broom heads they usually play around with them and then pluck the bristles off to floss.”

“We have found that animals from certain harems [groups of female baboons with a male] floss more than others, so potentially animals are learning from their social cohorts,” she added.