Restaurant Puts up Sign Offering Liam Neeson Free Food, and He Shows Up

At the Big Star Sandwich Co in Vancouver, Canada, the owners of this little sandwich shop were shocked when their favorite actor walked in the door. Although they shouldn’t be too shocked, because it was their decision to place the sign “Liam Neeson eats here for free” in front of their restaurant. Earlier that week, they found out that Neeson was in town filming a new movie and decided to leave the message on a chalk board in front of their establishment as a joke. But never in their wildest dreams did they expect him to actually show up. 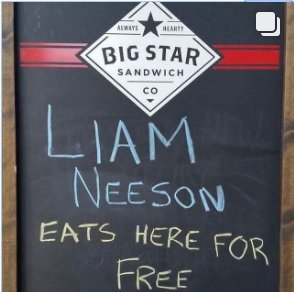 According to patrons, the sign was placed in front of the restaurant at 11 am, and restaurant’s own social media account took a photo and posted it. According to Alex Johrden, the director for Big Star Sanwich, they did not actually expect the Taken actor to show up in their door step. But a little over 7 hours after the sign was put out, at 6 pm, Liam Neeson walked in and asked for his free sandwich in his usual intimidating voice. 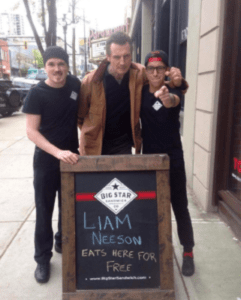 “We’re not sure how he saw the sign,” said Johrden “We assume he heard it through the production crew, who had been in and out all day.” According to the establishment, Neeson didn’t actually have time to eat a sandwich but he made sure to take a photo with the owners and the now famous sign. According to the owners, the sign always be valid and they are hoping that he comes back and actually takes them up on the free meal.