Couple Pulls a Gender Reveal on a Golf Course

ESPN network host Peter Burns and his wife wanted to do something special when finding out about the gender of their first child. So they headed to the beautiful and legendary golf course in Pebble Beach, California, where they could create some unforgettable memories of how they found out the gender of their first son/daughter. While most people that visit the famed golf course do so to relax and play a round of golf, this pair visited the course to find out if they were going to have a girl or a boy. 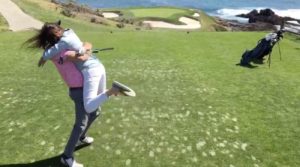 In the video that has gone viral, Burns is on a golf course teeing up a shot near his wife. His wife is excited and seems on the verge of something. Burns had a feeling that they were going to have a daughter and so he wore pink. His wife, on the other hand, had a feeling it would be a boy and wore blue. As it turns out the ball was filled with dust that would explode when it was hit. 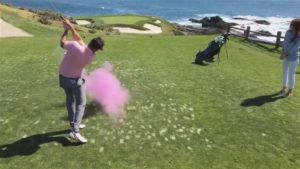 Before they set up the teeing shot at the gold course, they enlisted the help of their doctor by having him secretly place colored dust inside a golf ball. The doctor would place blue if it was a boy and pink if it was a girl. When Burns finally hits the ball, you can see bright pink powder exploding from the hit. The couple jumps into each other’s arms in celebration. Burns got the idea after watching a baseball player do a similar gender reveal. Baby girl Burns is due in October of this year.