Restaurant Offering Huge Prize For Anyone Who can Complete Eating Challenge 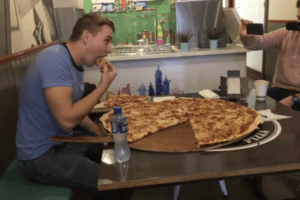 The restaurant Pinheads Pizza is offering a cash prize as well as bragging rights to anyone who can finish their special 32 inch pizza and two milkshakes in just one sitting. The owner of the restaurant, Anthony Kelly, claims that no one will ever defeat the challenge. He says that there have been up to 100 people who have tried but he has yet to crown a winner.

A local Dublin reporter was the latest to try and take down the challenge, but he failed and his name was added to the loser’s board. The reporter, by the name of Cormac O’Shea, only managed to eat three slices, about a quarter of the entire pizza in 35 minutes, and he didn’t even try to drink any of the milkshakes. 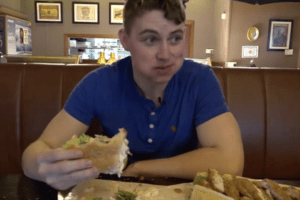 The store is prepared to pay out a cash prize to anyone who can complete the challenge, and they even have a “Wall of Fame” to honor the winner. But so far, the wall has been empty. Cormac has taken challenges like this before, but he says that nothing compared to this particular pizza challenge.

“It was a lot harder than the chicken fillet roll challenge I tried before.” said Cormac, “If at first you don’t succeed, try and fail again. As Mcgregor would say: ‘Good knock, I’ll be back’,” he continued.