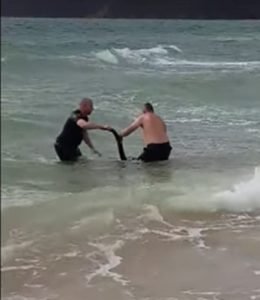 The two rescuers were sergeants Christopher Russo and Kirby Tonkin. The two officers dove into the water and pulled the unconscious animal to shore. When they got the kangaroo into dry land, the animal was not responding, so they performed chest compressions to revive the animal. Luckily, the CPR worked and the animal gained consciousness.

“He had less than a minute. He went under and as he came up you could see foam coming out of his nose. He was drowning,” Sgt Russo said. “I grabbed his tail and Kirby cradled his head and dragged him onto the beach and cleared his lungs to get the water out of him. Then we just started to push on his chest and he started breathing again and I could feel a heartbeat.” 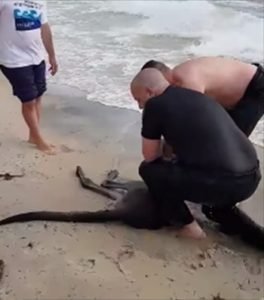