Residents Shocked to Find Alligator on their Porch

Earlier this week, residents in Florida went about their morning routine which included checking the front door for mail or packages. But when they checked their porch they saw something they did not expect. The family got the shock of their lives when they found a 10-foot alligator sitting by their doorstep. The family immediately called the authorities. 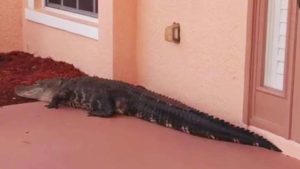 Members of the Cape Coral Police Department immediately responded after the homeowners reported that they had received a “suspicious package” on their doorstep. The police believe that the large reptile had somehow made its way from the swamp area near the residents to the shaded porch. The police officers took videos of the alligator lounging by the door, but the reptile eventually crawled off the property before animal control services were called in. 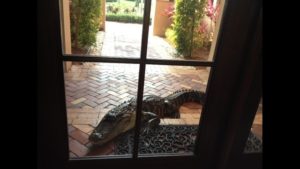 Police officers in the video can be heard jokingly calling it a “10-31” which is police code for crime in progress. The video was eventually posted on the police department’s social media page, where it quickly went viral. Â “Needless to say, the homeowners got more than what they bargained for,” they wrote in the Facebook post.

Florida contains the largest population of alligators in the United States. This is mainly due to the large swamp areas located mainly in the Florida everglades in the southern part of the state. The state of Florida has embraced this and has the animal as its state mascot. Most local sports teams and universities also have the alligator as its official mascot.