Residents Rescue Herd of Elk From the Ice

Last week, dozens of residents at the Palisades Reservoir in Wyoming jumped in to save a herd of elk that had accidentally fallen in some ice in the nearby lake. The temperatures were near minus 32 degrees when the animals fell into the freezing water. Aside from the threat of the cold temperatures, these animals could also drown in the ice water. 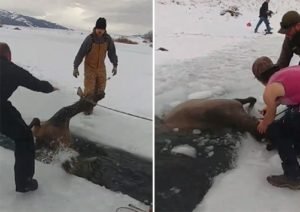 “I was headed into Jackson to go to work and I noticed a couple cars pulled over,” said local resident Dusty Jones “I looked off to the left and saw a couple of guys beating on the ice with a herd of elk right there in front of them.” Jones then approached the ice and called in a friend to bring a chainsaw. There were around 13 elk in the water, which was around eight to 10 feet deep. Eventually more and more people started to arrive to help. 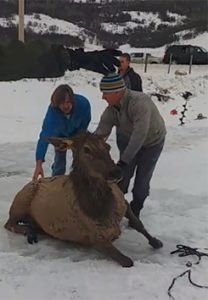 “Before you knew it, there were 30-40 people there,” Jones said. “We began cutting a little path toward the shore so the animals could walk out but they were so cold they couldn’t move. That’s when we just started grabbing them and pulling them out.” One by one, each of the elk was pulled out of the water and into dry land. Jones posted a video on social media of the last two elk being pulled out of the water.

“No elk died, which is awesome,” Jones said. “It was such a great thing.”