Reporter Falls into Pool During Interview with Swimmers

Recently the BBC reported on the Commonwealth Games, when something hilarious took place live on air. News reporter Mike Bushell was interviewing a group of England’s triumphant swimmers in the Gold Coast when he suddenly fell in the pool. The swimmers were sitting on the ledge of the pool when Bushell decided to come in closer. He was trying to get the microphone to all the athletes when he fell completely in. 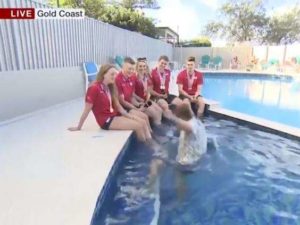 The sports reporter didn’t realize that there was a step into the deeper part of the pool and when he edged in closer and fell in, soaking himself along with his sound pack, microphone, and all his clothes neck down. The swimmers couldn’t help but crack up in laughter. The reported composed himself and stepped back onto the ledge and he even tried to salvage the interview with swimmers Sarah Vasey, Adam Peaty, Ben Proud, Siobhan Marie O’Connor, and James Guy. But it seems that the microphone was no longer working. 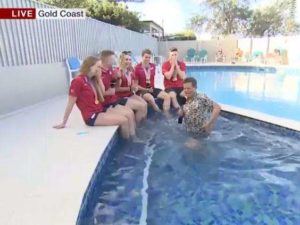 “I didn’t see the step! Sorry about that,” Bushell said embarrassed. Back in the studio presenters Charlie Stayt and Louise Minchin could barely contain their own laughter at the classic blooper.

“Bye, Mike, it hasn’t been dull.” Minchin added,“If you were going to set that up, you would imagine that might happen, and it did â€“ live on national television.