A former refugee and rocket scientist Mohamed Elbarkey has been headlining the news because of how he stood outside a Canary Wharf Station with a sign looking for a job. Photos of the man spread on social media, where it quickly went viral. His gimmick actually worked, and Elbarkey officially landed a job with Milamber Ventures, a special business incubator based in Marylebone. Elbarkey is an aerospace engineering graduate. 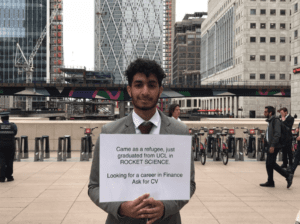 “I met Mohamed coming out of the tube at Canary Wharf this morning. He came to the UK as a child refugee and has two degrees in Space Engineering. He’s looking for a JOB IN FINANCE. Please RT! DM me for his CV, if you want to hire someone smart who thinks outside the box.” said the tweet. The tweet came with a picture of the 22-year old and quickly made its rounds on social media. This led to Elbarkey having around 15-20 interviews and meetings with several job recruiters. 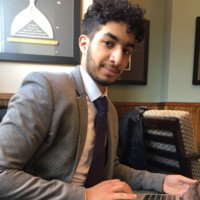 Eventually he was offered a great position by Milamber after three interviews. They met with several other companies that offered him advice, mentorship and encouraged him to apply for their graduate programs. In a recent interview with the Evening Standard, Elbarkey said he was thankful for the opportunity and the job he landed was exactly what he was looking for. He also encouraged other job seekers to think outside the box in trying to find work.

“I think especially people who might not have the network, I would suggest any creative method to get a job.” explained Elbarkey.