In the city of Campos do Jordao, Brazil, students gather to attend the country’s first and only School of Magic and Witchcraft. The castle is a real castle built in the mountain city of Campos do Jordao, which is around 180 kilometers away from Sao Paulo, Brazil. The school was inspired by the Hogwarts school of Witchcraft and Wizardry found in the Harry Potter books of UK’s JK Rowling, but it has its own unique style and curriculum. 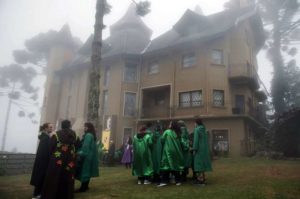 The school was founded in 2016 by Vanessa Godoy. Godoy says that the school was made to adapt, and not to copy exactly, the fictional witch and wizard school from the book. Most of the school’s students are fans of the books and are into the entire operation, which including donning a robe and wielding a wand. The school is also limited by what they can copy from the books, so they fill in the blanks with Brazil’s own magical folklore. 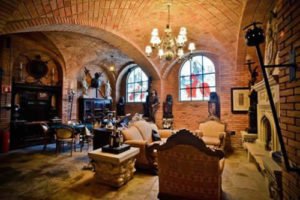 “We have our own stories. We get into a lot of the mythology because Brazil is a very magical country,” says Godoy. Among the classes offered in the school includes familiar courses such as Potions and Elixirs, Witchcraft and History of Magic, and several other classes that cover dances, contests and tournaments. There is even a quidditch-like game based on the popular broomstick sport from the books. The school offers sessions for clients to “take classes” each day. Tuition to the school is not cheap. The four-day session at the castle costs around 2,650 reais, or around $800 dollars. When the school is not in session, the castle is used as a hotel.