One of the largest eggs ever discovered belongs to the large elephant bird. And it is also one of the rarest eggs because the bird is now extinct. But it seems that one egg has been hidden in plain sight all these years. The egg was hidden in the back of an American museum. The people at the museum all thought that the egg had to be a replica because of its size, but it was actually a genuine elephant bird egg. 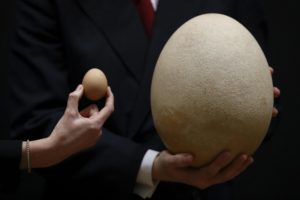 The curators of the Buffalo Museum of Science were cataloguing their collection when they spotted the gigantic egg in a cabinet. The egg weighed 1.4 kilograms and was measured at 30 centimeters. The piece was labeled as a replica of an elephant bird egg, but when it was reappraised, it was discovered to be a genuine egg.

Elephant birds are large animals with the largest specimens measured at three meters and weighing up to 500 kilograms. The elephant birds were the ancestors of modern flightless birds such as ostriches and emus. These birds were found in the island of Madagascar until they were extinct in the 17th century.Â  Their eggs had a volume that was the equivalent of 150 chicken eggs, which were the largest ever recorded. 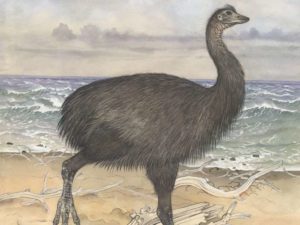 The Museum’s collections manager of zoology, Paige Langle, was the first to discover the egg. She said that when she held it in her hands, it had felt too realistic. “I tried to shrug it off, but the more closely I looked at the surface of the eggshell and felt the weight of the egg, the more I kept thinking this has to be real,” she said.

To make sure that it was a real egg, they sent it to the State University College at Buffalo, where it was radiographed. It was confirmed to be an authentic egg that had been fertilized. The egg is a very rare specimen, with fewer than 40 eggs known to exist.