Earlier this week French auction house Aguttes announced that they would be putting a genuine dinosaur skeleton up for sale in June in Paris. The fossil skeleton is currently owned by an unnamed British businessman. The dinosaur remains were discovered in the Morrison Formation in Wyoming in the United States. The skeleton is said to be from the late Jurassic period or sometime between 160 and 145 million years ago. 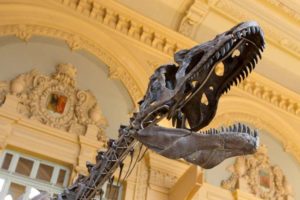 According to Aguttes, the dinosaur was an Allosaurus, a large carnivorous theropod dinosaur species that lived ruing the late Jurassic. This species of dinosaur had short clawed three-fingered limbs, a large head on a short neck, and a long heavy tail to balance the body. It resembles a smaller Tyrannosaurus Rex. The skeleton put up on sale is 2.6 meters tall, and measures at 8.7 meters from its head to the tip of its tail. Only 70 percent of the skeleton has been pieced together since it was discovered in 2013. 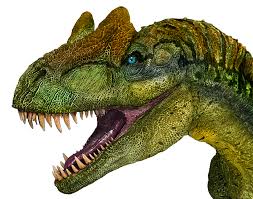 The skeleton is currently on display at the Gare des Brotteaux in Lyon, an old railway station converted into an exhibition space. Before it will be auctioned, the skeleton will be moved to the Eiffel Tower in Paris, where it will be displayed for the sale. The auction house will ship the skeleton anywhere in the world and will also help the buyer in “all aspects of storage, shipping, assembly and possible commercial display.” The auction house will also offer the services of Eric Mickeler, a paleontologist who advises Aguttes.

Aguttes have sold fossilized skeletons before, with sales of mammoth skeletons in the past. The estimated price for this dinosaur skeleton is between 1.2 million and 1.8 million Euros (1.5-2.2 million USD).