Evie Flanagan of Augusta, Maine wants to be a police officer when she grows up. The 5-year old has such a passion for the profession that for her birthday party, she decided that the theme would be about the Police. And when Officer Brad Chase of the Augusta Police Department showed up at the part, little Evie could barely contain her excitement that a real cop had attended her party. 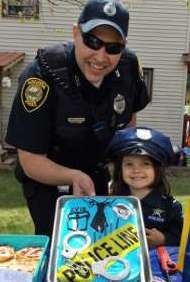 “It was a surprise to us all,” says Lauren Flanagan, the mother of Evie said. “Evie’s face lit right up. She was so excited to show him around, show off her cake and she was even kind enough to offer him a doughnut, which was hysterical.” Officer Chase then showed the kids his patrol car, offered them some police goodies and memorabilia, and even invited the entire family for a tour of the police station. 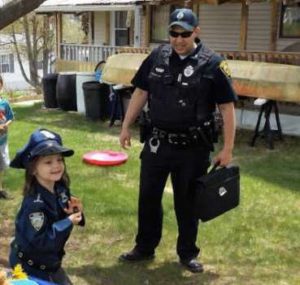 It turns out Lauren had reached out to Officer Chase ahead of time to ask if he could attend the party. He originally thought he could not make it because of his job schedule, but he eventually decided to make an exception for Evie, who was such a fan of the police. Evie has wanted to become a police officer ever since she saw the movie “Zootopia”. The animated film is about a bunny police officer named Lt. Judy Hopps who wants to make her world a better place. And just like officer Hopps, Evie says that she hopes to one day become like her heroes and serve and protect her community.