Earlier this week, photos and videos of a rare White Moose have been spreading all over the internet. The moose was potted in the province of Varmland in Sweden by Hans Nilsson. The moose was captured entering a stream and swimming towards the other side then walking away from Nilsson. So far the video of the White Moose has garnered more than a million times on Facebook. It also has more than 3,000 comments and close to 20,000 shares. 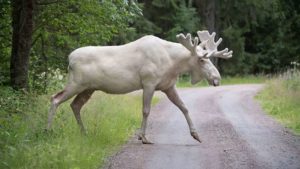 According to the report of a local radio station, the White Moose Bull wasn’t afraid of humans at all and came swimming straight towards the cameraman. But this sighting is not just some random coincidence. Nilsson has actually been looking for the animal for three years. There are only around 100 of these white moose in Sweden, and they can be very elusive to find. Moose or elk are the largest species of the deer family. They are distinguishable by their broad and large antlers and their distinctive large lips. Moose usually inhabit forests with cold climates and they can usually be found in the northern areas of America and Europe.

White moose are not albino animals, but rather moose that grow white fur because of a genetic mutation. There are more than 400,000 moose found in Sweden, with most of them being the normal shade of dark brown. While some have speculated that the unique shade makes it easier for hunters and predators to find moose, there are no concrete studies made on the white moose because of its rarity.