David Ward and Rebecca Hayes were never able to take newborn pictures of their son, Clayton, so they decided to make up for it by having a baby photo shoot with their son, even if Clayton was a full grown man at the age of 21 years. Hayes says it was her idea to take newborn photos with her child, and despite the age of Clayton, both her son and husband agreed. They thought that it would be a very strange, but also an incredibly funny photo shoot. 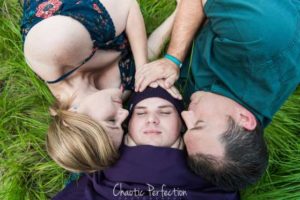 “I had the idea one evening when we were all sitting around and laughing at what a weird world ours had become,” said Hayes. “I half joked about it but both David and Clay were surprisingly on board, so I had to jump on it! Clayton is very deadpan and dry and just stared at me and said ‘we have to do this’ we all cracked up while we discussed what ‘poses’ we would do.”

“We had discussed ahead of time what we could do to avoid giving off a ‘creepy’ vibe â€” which some people still got but that’s OK. I’m not gonna lie, there were discussions about making a huge basket and possibly the mention of a giant teddy bear. I’m the end we decided simple would be enough.” says Duffi Crowson, the photographer, and a close friend of the family. 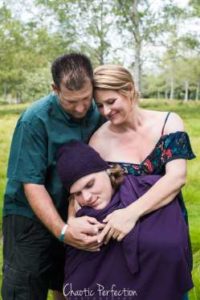 “The feet shot had us going and then Duffi showed me the tender one of the three of us lying in the grass, and I lost it,” recalls Hayes. “We could not stop laughing. I really just want people to know that life is weird and horrible and wonderful at times. You never know where it will lead, and you have to embrace what comes your way fully. We went through some rough times and just learned to grasp onto those things that are truly important.”