In Belgrade, a 10-year old Afghan refugee named Farhad Noory, exhibited his works including paintings and photographs. The young artists was dubbed as “Little Picasso” and he is hoping to raise enough money for a Serbian child who needs therapy after battling with brain cancer. Noory has lived in a refugee camp in Belgrade for eight months, along with his parents and two younger brothers. It was during this time that people started noticing his unique talent. 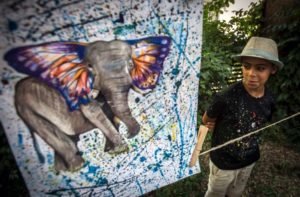 One of the most popular works of Noory has been his paintings of famous people. He has created portraits of celebrities such as German Chancellor Angela Markel, painter Salvador Dali, and global superstar and footballer Christiano Ronaldo. Most of his works have been posted on social media and this attention has made him a local media star. Noory and his family were part of the many migrants that came from South Asia, Africa, and the Middle East. They were in Serbia for a long while before they were finally able to move to a safe European country. Noory’s talent was first spotted during a workshop in Belgrade organized by local aid groups. 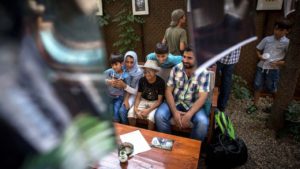 “We quickly realized how talented he was and sent him to a painting school as well as a three-month photography workshop, so this is a retrospective of what he learnt there,” said Edin Sinanovic of the Refugees Foundation. Aside from his inaugural exhibition, Noory will also be selling his photographs of everyday life in the city. The prints of his paintings are sold at $3-8 each. Noory says that he wants to keep doing this to help others because he believes that the world needs more people to be kind to each other.