In Florida, a team of biologists spotted a rare two-headed loggerhead turtle. They were at a turtle nest when they saw the recent hatching of a loggerhead turtle nest. According to the one of the biologists, Kate Mansfield, it is rare to find two-headed turtles, but it is not unheard of. Mansfield is the assistant professor of the University of Central Florida Marine Turtle Research Group. 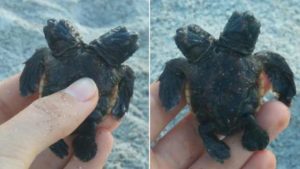 Mansfield and her group were observing the endangered loggerhead turtles nests and they were able to monitor one hatching at the beach in Brevard County. It was a routine hatching until they noticed that one of the turtles looked different. When they looked closer to investigate, they found that the hatching had two heads. Loggerhead sea turtles are known for their nesting behavior of going to a beach, digging a nest with their hind legs, and laying their eggs in a hole and burying it with sand. One nest can have as many as 100 turtle eggs. When the eggs hatch, hundreds of baby turtles crawl through the beach and into the water. 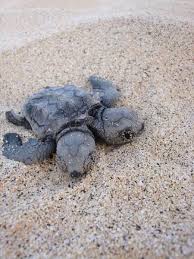 “We see a number of developmental abnormalities each year,” said Mansfield. She mentioned that they spotted the same abnormality on the same beach last year. But what made this particular turtle different was how healthy and strong it was. Usually, turtles with birth defects such as this are less active and are not likely to make it out to sea. When they released the two-headed baby turtle, it seemed strong enough to crawl to the sea. Despite this, the team suspects the turtle has other internal defects and may not live long.