Colombians Have Day of Laziness to Battle Stress

The city of Itagui, Columbia (near Medellin), recently celebrated the World Day of Laziness. The day was made to spread awareness about the need to unwind and rest from the stress of working life. All over the city of Itagui, people hauled mattresses and hammocks into the streets to celebrate the holiday. It was a way to urge workers and students that are overstressed to slow down and take time to rest. 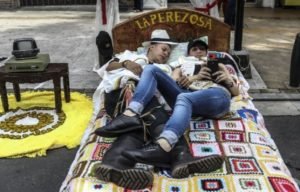 The daylong celebration of laziness has been held in the city since 1985. The small city of Itagui is found in northwest Colombia and has a population of a little over 200,000. Ironically, the city is known for its commerce center and its industrial park. With such a hardworking population, the city decided to give them a day where they can relax and rest from the stresses of their work week. 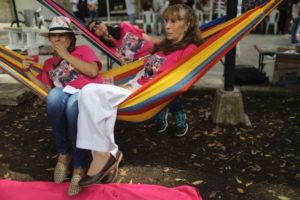 “We wanted to draw attention to the importance in any community of free time and leisure activities,” said Carlos Mario Montoya, who had the idea that the city should celebrate enjoying life. The 65-year old Montoya is still involved in the yearly celebration, and even helped out with this year’s event. The festivities during the day include competitions for the best looking pajamas, a pillow juggling contest, and a race for the fastest bed with wheels.

“The biggest illness we have today is stress — the hustle-bustle of everyday life,” said Jhon Jairo Alonso, a local relaxing in his pajamas. Alonso was with his wife, his mother, and a family friend lazily hanging out at the city park.