Fisherman in Gaza Finds Message in a Bottle

In Gaza, a Palestinian fisherman named Jihad al-Soltan was able to recover a letter in a bottle that was written by Bethany Wright and her boyfriend Zac Marriner. THe bottle was found in Gaza beach, in Gaza. The bottle was caught in the net that was cast by al-Soltan as he was fishing those waters that morning. The bottle travelled all the way from the Greek Island of Rhodes.

The Rhodes Island in Greece is located nearly 800 kilometers (500 miles) from the beach in Gaza. According to the message, the bottle was placed in the water by the British couple while vacationing there last July.

“Hello, Thank you for picking up this bottle. As a reward here are some magic flowers. We are currently on holiday on Rhodes and we would love to know how far this bottle got, even if it’s just the next beach.” said the letter. By the time the bottle had reached Gaza, the flowers had wilted. The letter was signed: “Faithfully, Zac and Beth”.

Soltan replied to the email addressed enclosed and realized that the couple were university students Wright and Marriner. Soltan said that he was amused that the water could carry a message into troubled waters that included an Israeli naval blockade and fishing zone restrictions. These are measures taken by Israel to prevent arms smuggling in the hostile region. 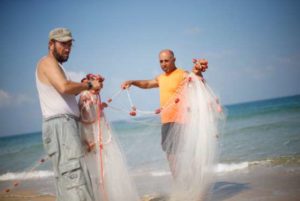 “As a fisherman I felt this letter traveled through borders and international waters without restrictions while we as fishermen are unable to go beyond six miles,” said Soltan. “I hope one day we would become as free as this bottle was.”