Tyrannosaurus Rex ants were only recently discovered, at around 20 years ago. Although there have been several specimens submitted for study, there were no live ants or an entire colony found for studyâ€¦ until now. Biologist Mark Wong accidentally found a colony of T-Rex ants while conducting an ant diversity survey in Singapore. Wong and his colleague Gordon Yong were from the National University in Singapore and carefully collected the colony for further research and study. 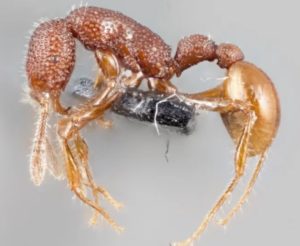 The colony was made up of 13 workers, several eggs, larvae and pupae. The ants were found in a rotting piece of wood stuck to the ground. The land was second-growth forest that was once an orchard and a rubber plantation. There is so little that is known about T-Rex ants and how they behave in the wild. The last sample that was collected was only a single specimen. No one even knew where these ants nested or how they bred. One known fact about the ants is that they are cannibals and often feed on their young. 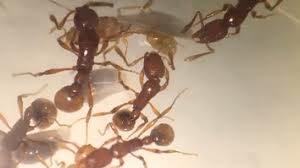 The research that was conducted also found out that the ants, despite their menacing name, were actually timid creatures. The ants were reclusive and preferred to stay in their colony nest. They were also active more at night, suggesting they were nocturnal in the wild. They were not aggressive ants. In fact, when faced with a threat, the ants would curl up and freeze until the threat was over or left. The ants were also very tentative with food, often examining the food samples that the scientists offered, but never actually picking them up or consuming them. The ants were named after the famous dinosaur because of their snouts that resembled a T-Rex.