A rare edition of French author Marcel Proust’s “Swann’s Way” was purchased for $623,000 in an auction earlier this week. According to Sotheby’s, the book also included letters that revealed the bold self-promotion and marketing side of Proust. The book was previously valued at $500,000 to $700,000. It is one of only 500 copies ever produced. It is also the first volume of Proust’s famous “Remembrance of Things Past” series. 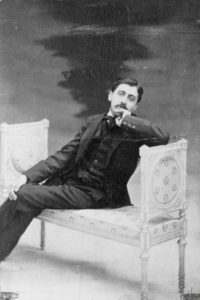 This certain edition of the book is extremely rare. It was printed on washi, a popular thin handmade Japanese paper, and published in 1913. Three copies of the edition are owned privately, while another disappeared during World War II. Bound into the back of the copy sold at auction are eight documents that contained handwritten notes by Proust himself.

The notes were handwritten letters to friend in the Parisian media asking them to publish favorable reviews of his book. In fact, he demanded that they publish reviews that were written by Proust himself. He also offered money for glowing reviews of his book, while asking the editors to keep the self-promotion hush-hush. Proust described Swann’s Way as “a little masterpiece”, and in the third person, describes his work: “What Mr. Proust sees, senses, is entirely original…” 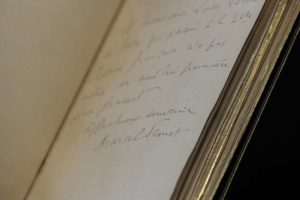 The review actually appeared on the front page of the Journal des Debats in Paris. The article cost Proust around 600 francs at the time (which is around $2,300 now). Proust also had to pay another 300 francs for a review to appear on the front page of Le Figaro. Jean-Yves Tadie, a Proust expert, said that the author “understood before everyone else the importance of publicity and media relations”.