98-year old Ada Keating recently joined the Moss View Care Home in Liverpool, England. Believe it or not, she joined there so she could be with her son, who is also a resident. Her son, Tom, is an 80-year old senior citizen that moved to Moss Views in 2016 because he needed more support and care. In just a little over a year, Ada decided to move to the same home. She said she did it because “you never stop being a mum”. 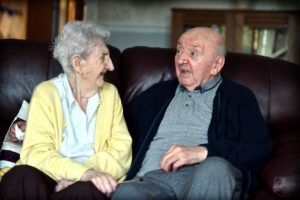 Ada had Tom at the young age of 18. They have been very close throughout their lives and you can see it in the affection they show for one another. According to the care workers at the home, Ada and Tom are inseparable and they love spending time together. They also like to spend time playing a game or watching Emmerdale, a popular show on television.

“I say goodnight to Tom in his room every night and I’ll go and say good morning to him,” said Ada, a former auxiliary nurse. “When I go out to the hairdressers he’ll look for me to see when I’m coming back. When I get back he’ll come to me with his arms outstretched and give me a big hug.” 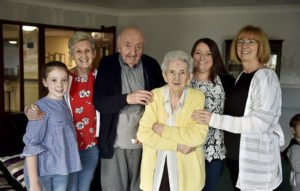 “They’re very good here and I’m happy to see my mum more now she lives here,” said Tom. “She’s very good at looking after me. Sometimes she’ll say ‘Behave yourself!’ ” Tom also said that he was very happy when her received the news that his mother would be moving to the same care facility