Nine incredibly rare bars of chocolate were discovered in a tin that belonged to a war hero. The bars of chocolate are were also estimated to be at least 103 years old. The bars were given as gift tins by the colonies in France to the troops serving there during the first Christmas of the First World War. The tins and the chocolates were made in Mansfield, Nottinghamshire. 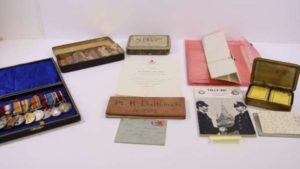 The tins were part of a collection that belonged to Leicestershire Regiment soldier Richard Bullimore. Only one of the 10 bars was eaten and the tin is currently up for sale at an antiques auction that was organized by Scunthorpe Eddisons CJM. Paul Cooper from the company said that the tine was “made by Barringer Wallis & Manners of Mansfield, one of the world’s leading manufacturers of decorative tin wear.” 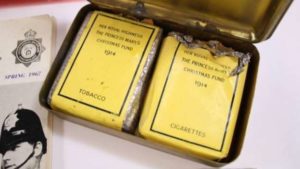 “The colonies chocolate was sent to troops in that first winter of the war. Trinidad, Grenada and St Lucia provided the cocoa. Cadburys made the chocolate bars. Even the container is rare but to find the chocolate still inside is just unreal.” said Cooper. He also added that the chocolate looked in good shape. 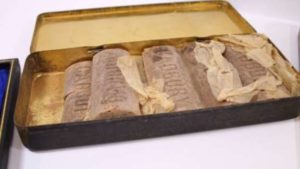 “Although I have to admit that I wouldn’t be tempted to give it a go, even if the experts say that chocolate seldom becomes really dangerous over time but it does lose its flavor and texture.” The gift box given to the soldier also contained cigarettes, tobacco, and matches. Almost all the contents were still in the tins, except for one chocolate bar and three cigarettes.