Last month, a 17-year old high school student named Allison Closs in Pennsylvania took a cardboard cutout of the actor Danny DeVito as her date to the high school senior prom. She said that there was a “shockingly wide variety” of premade cutouts of Danny DeVito and she decided to order one for herself as her date for prom. The cutout cost her $100. 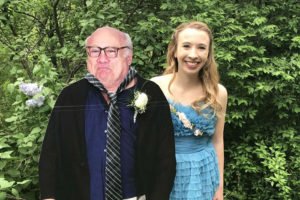 “I considered other celebrities, like Bill Nye the Science Guy,” Allison said in an interview “But many of them would [have required] ordering a custom-made cutout, and I’m not about that money life, if you know what I’m saying.” The story of Allison and her date made the news online and her posts have since gone viral. 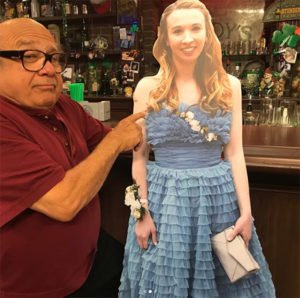 But now, the actor himself decided to return the favor. He did exactly what Allison did and brought a cardboard cutout of Allison to work. It seems DeVito and the people he worked with at the TV show “It’s Always Sunny in Philadelphia” heard about what Allison did and they wanted to give a shout out to Allison.Â  Rob McElhenney, a costar of DeVito in “It’s Always Sunny in Philadelphia” co-star, shared a photo of Danny with a cardboard cutout of Allison. The photo was shared on McElhenney’s Instagram account.

“Hey Allison- I heard you took cardboard Danny to Prom. What a coincidence. He took cardboard Allison to Paddy’s,” McElhenney wrote. The post has since gotten back to Allison, who can hardly believe that news of her prom date reached the actor himself.