A new world record was set last week when students in Taiwan kept a record of the longest-lasting rainbow in recorded history. The rainbow arched over the skies of northern Taiwan for a record-breaking nine hours (or 8 hours and 58 minutes to be precise). It was the longest timed rainbow that was recorded and timed. The rainbow was recorded by the students and staff of the Chinese Culture University in the mountains of Taipei. The sight of the rainbow was in the sky from 6:57 in the morning to 3:55 in the afternoon. 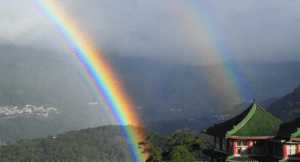 “It was amazing â€¦ It felt like a gift from the sky … It’s so rare! After four hours, we mobilized all our students and began to notify everyone in the school to take pictures and send us pictures,” said Chou Kun-hsuan, a professor in the university’s Department of Atmospheric Sciences who helped lead the efforts to document the rainbow. Kun-hsuan had seen a 6-hour rainbow appear a week before and vowed to be prepared the next time a rainbow appeared. 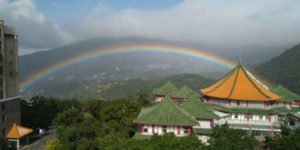 The Chinese Culture University posted a bulletin asking students and staff to send in photos and videos of the rainbow to prove that the rainbow was a record breaking one. By the end of the day, they were sent more than 10,000 pictures from the Department of Atmospheric Sciences alone, with thousands more sent in by students and residents in the area. The previous record for the longest rainbow was set in Yorkshire, England, on March 14, 1994. The rainbow in England lasted for six hours, according to the Guinness World Records.