Private Jet of Elvis Presley Goes Up for Auction

If you’re looking for a private jet and you’re also looking to purchase a piece of music memorabilia, then you might want to bid on the private jet of the ‘The King’ himself. The custom-made private jet of Rock and Roll legend Elvis Presley is set to be up for auction later this month. The plane is a 1962 Lockheed Jetstar Jet, which was owned by the famous singer and his father, Vernon Presley. The jet is estimated to sell between $2 and 4 million.

The jet was custom made with plush red velvet seats, gold details from nose to tail, marble bathroom sinks, and a red shag carpet. The jest was one of three planes owned by Presley. The other two, which were named the Lisa Marie and the Hound Dog, is on display at Graceland. The third private plane has been privately owned for the past 35 years. It was kept in an airfield in Roswell, New Mexico, at the Roswell International Air Center. It was said that the dry desert air made the airfield the ideal place to store retired planes. 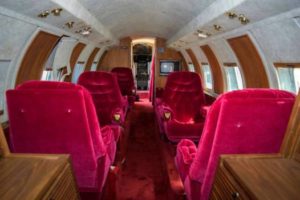 The jet will be something of a fixer-upper. The last time it was flown was nearly 40 years ago, and it has never been restored. The plane lacks a functioning cockpit and there isn’t even an engine under its hood. But it is also one of the most unique planes in history, and not just because it was owned by Elvis. According to the auction site, the jet is one of just 204 airplanes made between 1957 and 1978. It was built as a joint project by Lockheed and Jetstar. The highest bid on the plane is currently at $126,000. According to sources, the owner hopes that Priscilla Presley will bid on the plane so that it ends up in Graceland where most of Elvis’ most prized memorabilia are kept.