Earlier this week, Prince Harry was spotted having some fun watching the Invictus games with former President Barack Obama and former Vice President Joe Biden. The British Royal was photographed having fun sitting next to Obama at the games in Toronto. The pair was seen sitting with Biden and his wife and they were cheering the athletes during a wheelchair basketball competition. 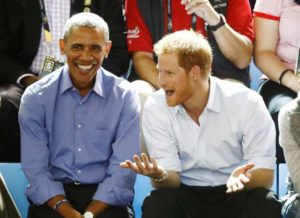 The Bidens and the Obamas have long supported international competitions like the Invictus Games. The Bidens attended last year’s games in Orlando Florida with Michelle Obama. The former first lady of the United States even had a short message for all the athletes participating in the event. Prince Harry and his advisors are the founders of the sporting event, which is created for international sick or injured service personnel. The multi-sport even has been taking place since 2014. 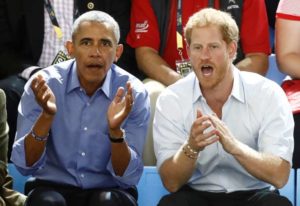 This year, more than 500 athletes from 17 nations will participate in 12 adaptive sports, including basketball, rugby and indoor rowing. The former president and the prince has had a long standing friendly rivalry on Twitter about who would win the games, but this is the first time that the two were seen watching the games together. The basketball game that they were watching was between the US team and the team from France. Before the start of the game, Prince Harry and Obama took pictures with the US team. Even as the games are being held, there have already been bids to host the 2018 Invictus Games. Among the leading candidates includes the Gold Coast in Australia.