When two male friends meet, there is always the looming question of whether to go for the classic high-five or the edgy ‘bro’ fist-bump. Miscommunication can lead to an awkward moment, as Prince Harry soon found out recently with his small friend. Prince Harry was attending trials for the Invictus Games when he met a small friend, a 2-year old boy also named Harry. When the older Harry approached his younger namesake, the two exchanged hands on the familiar dilemma. 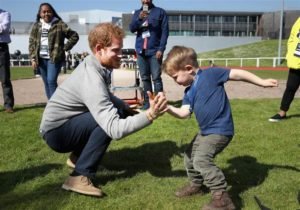 While Prince Harry was going for a high five, the little tike was offering a fist bump. Unperturbed, the Prince wanted a second chance and offered a low five, but little Harry was committed and still met the prince’s palm with his small fist. The second handshake had a little more in it that it sent little Harry sprawling. The smiling Prince then picked him up for a little spin as the two Harrys enjoyed their little meet and greet. 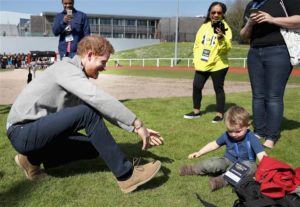 The Prince was in Bath, Somerset to watch this year’s trials to the Invictus Games. The actual games are set in Toronto later on this year, on September 23-30. There’s a good chance that Prince Harry will be attending the actual games as Toronto is actually the home of his current girlfriend, Meghan Markle. The Invictus games are an international competition between wounded servicemen and women. The event was created by Prince Harry in 2014 after watching the Warrior Games, a competition of the same kind based in Colorado.