Earlier this week, crew members Paula Podest and Carlos Ciuffardi got married on board the papal plane. The couple requested to be married by none other than Pope Francis. They were married mid-flight between Santiago, Chile and the northern city of Iquique. The Pope was on his third day of his South American tour. 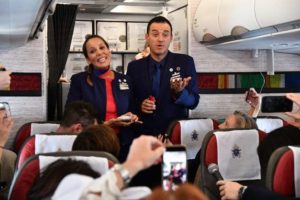 Pope Francis officially joined in matrimony, 41-year old Carlos Ciuffardi and 39-year Paula Podest. Both of the crew members were flight attendants with two children. The two were already married in a civil ceremony in 2010, but they were not formally wed in the eyes of the church. So they took this opportunity to get married with a very special representative presiding over their vows. 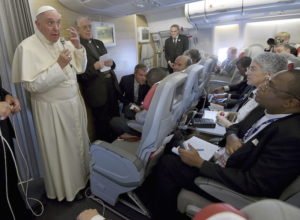 The short ceremony took place at approximately 36,000 feet above ground on a two hour flight from the capital of Santiago to the city of Iquique. At the end of the ceremony, the couple made a few statements for the journalists traveling with the pope. Two of the journalists also co-signed the wedding certificate as witnesses. The certificate also bore the signature of the pope, which was a simple handwritten “Francis”.

According to the Vatican, the Chilean couple was not able to have a church wedding at the time of their civil ceremony because the church that they wanted to get married in was destroyed by an earthquake. The pope was welcomed by tens of thousands of pilgrims when he arrived in Iquique, where he is scheduled to preside over an open-air mass on the shored of the Pacific.