Pope Francis has been one of the most visible popes in the entire line. Most of it is because he lives in a generation where almost everything a person of interest does is documented, photographed, and recorded. Some of it is also because of the many quirks that our current Pope possesses. The most recent one has been the odd way that he holds a mic. 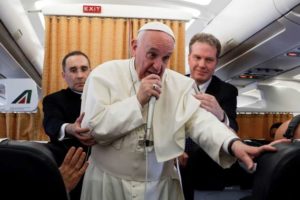 If you look closely at the way Pope0 Francis holds a microphone, you will notice that he holds it at the tip, or the round receiver end. And if you are familiar at all with hip hop culture, you will also realize that that is how most rappers also hold their mics. The most recent photo of this was taken in a press conference on his flight home from Cairo to Rome. He was talking to journalists on the flight and holding the microphone like DJ or a rapper would when “dropping a verse”. 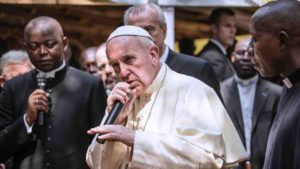 Of course, this meant that the photo went viral, and soon there were several tweets mentioning the OG Pope and his dope rhymes. If you look at the picture closely, you can even see some of his security personnel holding him back like a rapper would in the middle of a fierce rap battle. In reality, the Pope was actually talking about a very serious subject, specifically the tense relationship between North Korea and the US. But that didn’t stop most netizens from captioning the photo with several rap verses and lyrics.