The Poor Don’t Go Hungry In This Turkish Town

In the small town of Karakocan in Turkey, there is a small establishment called the Merkez Restaurant. It is among the many eateries located all over the small town that offers its customers food, free of charge. This offer is especially important for customers that have no money and cannot afford food. This generosity for the local community has been a tradition that has been passed down from generation to generation. 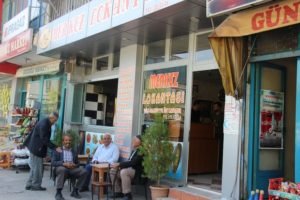 The owner of Merkez, 55-year old Mehmet Ozturk, says that he keeps at least three tables reserved for the needy. These tables are kept open even during rush hour when his restaurant is full of people. According to Ozturk, there are at least 10-15 people to come to his establishment to take advantage of the free meal. In a town of 28,000, the residents also say that there are at least 100 people that are fed for free each day.

One of the regulars at the Merkez Restaurant is Galip, an elderly man suffering from mental illness. Galip does not say much, but he appreciates the free meals he receives from establishments such as Merkez. The tradition to offer food to the needy was fist established in the 1940’s at the Merkez Restaurant. It was one of the first places to offer food at the town. The practice was eventually picked up by the other eateries in the town. 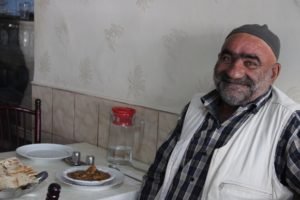 “I remember HacÄ± Huseyin, the former owner of the restaurant, and witnessed his enthusiasm when I was waiting tables at a very young age. He used to look for needy people to feed on the streets, bring them in groups to the restaurant sometimes three, sometimes five times a day,” Ozturk says.”I tell them what we do is not unique. Inviting the poor does not have a slight effect on my earnings, if anything it brings barakah (blessings).”