In Iowa, an 11 year old boy named Alec Gotto is now being called the cow whisperer because of his incredible way of communicating with cows. Alec is confined to a wheelchair because of a neurological condition that he suffered when he was just 8 months old. But that didn’t stop him from joining steer shows and showing people his incredible bond with animals almost three times his size. In the most recent Governor’s Charity Steer Show, Alec lead his Angus steer named JD (John Deere). 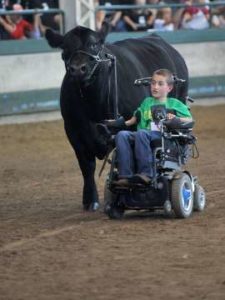 Alec’s father Chad grew up around cattle, but he says he never saw anyone who could connect with the animals like his son could. Chad and his wife Carrie grew up on farms and they are both familiar with raising cattle. Alec is often seen with a steer and he leads it in cattle fairs. Alec moves with the steer by turning his head and activating sensor pads that operates his wheelchair. Alec’s father custom fit a metal bar to the base of the wheelchair for extra protection. But these cattle are often connected to the boy with just a zip tie. 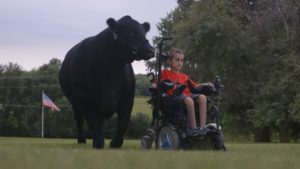 “I can tell you I had goose bumps,” said Doug Bear, director of industry relations for the Iowa Beef Council. “Definitely it was one of the top memorable moments of any of the Governor’s Charity Steer Shows I’ve coordinated.”

“He’s the cow whisperer,” Chad said “JD is just a totally different steer when he was with Alec. I didn’t think the determination would be as much as it is, but it’s there.” His talent is remarkable especially if you consider that Alec only started showing cattle just last summer.