In New Jersey, a 7-year old boy blew out his birthday candles at his home as his mother and father sat beside him. The tradition of blowing out candles was to make a wish as you snuff out the flame. When he was asked by his parents what he wished for, he said that he wanted them to get married. And on cue, the little boy’s father dropped to one knee and proposed to the boy’s mother. The engagement was filmed and posted on social media, where it quickly went viral. 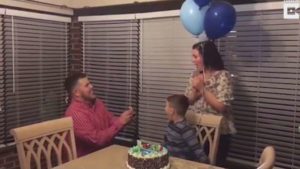 The little boy was 7-year old Dominic Hall. He had voiced out his wish for his parents to get married, and this was something that his father Eamon Hall, was counting on as he blew out his candles, and when he asked Dominic what he wished for, his son replied: “For mommy and daddy to get married.” This prompted Hall to bring out a ring and kneel in proposal to his son’s mother, Samantha Panetta. 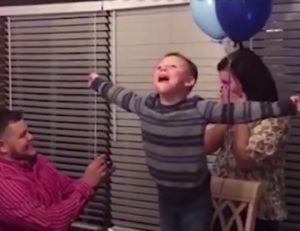 Panetta said yes to the cheers and celebration of everyone in the room. But no one was more excited than the birthday boy, Dominic. Rarely do birthday wishes come true, but for Dominic, he was able to receive his birthday wish almost immediately after blowing out the candles on his cake. In the video, Dominic can be seen standing on the chair and throwing his arms in the air in celebration.

“I am gonna be a son!” exclaimed the happy birthday boy as he rejoiced and celebrated over his birthday cake.