In Poland, a group of raftsmen are assembling tree trunks into a long raft and riding it down the Vistula, the country’s longest river. They are doing this to revive an ancient tradition of timber floating, or floating timber and lumber down a river for transport. The group hopes to ride the 450 miles from their village and the Baltic in a little under a month or 29 days. 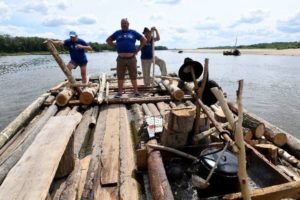 The group starts when their captain, Zdzislaw Nikolas, says the riverman’s prayer than sings a song to honor their patron saint, Saint Barbara. They sing in the same ways that their ancestors did when they rode the river to transport timber, more than 100 years ago. For centuries, timber floating was a way to bring riches to the many villages found along the Vistula. Men sent all kinds of goods and merchandize down the river, but most of the profit came from the wood in the forests of the southern region of Poland to a region in the Baltic called the Gdansk. 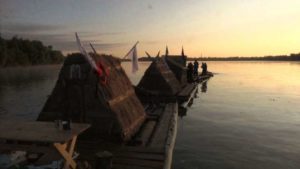 “As soon as the ice melted on the Vistula and the currents of the Vistula and the (tributary) San were flowing freely, raft makers got to work and sent the wood floating down to Gdansk,” says Captain Nikolas, “The whole village of Ulanow did this job and it was often a family affair passed down from father to son. It disappeared with the beginning of the war in 1939 when the German army’s bombs destroyed the bed of the Vistula River.” After the war, timber floating was replaced by trucks and trains. But Nikolas and his crew is hoping to revive this tradition by riding the river with logs once again.