The Omaha Police Department decided to honor one of its own with a surprise retirement party. The party was done mostly for the fellow officers because the retiring officer was an 18-year old horse named Blaze. Blaze spend his last three years working with the Police down in Omaha, and now he will be honored with his very own retirement party before he heads out to pasture and a comfortable life of retirement. 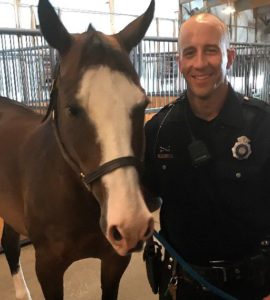 Blaze was honored with a retirement party that was held at the Omaha city equine facility earlier this week. The video of the retirement party was posted by the Omaha police department on their official Facebook page. Among the highlights of the night included the entrance of the horse of the hour. Blaze was escorted out of his stall by his partner, Officer Nathan Waller. 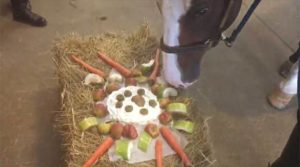 The party was for Blaze and so most of the food prepared was made for him also. There was a cake made out of carrots and apples served on a bale of hay. There was a lot of amusement when Blaze went for the hay instead of the fruits and cake. During his time with the police department, Blaze was a member of the mounted patrol unit. He mostly helped keep the peace during protests, rallies, and demonstrations. Aside from his age, Blaze is retiring because there is inflammation in his feet. The horse will be moving to Ohio, where he will be living on a farm owned by his partner Waller’s parents.