There’s a very special bond between mothers and sons. Mothers would do anything for their sons, and the same is true the other way around. So when the police officers found out that the mother of one of their inmates was dying, they just couldn’t stand idly by and they the mother and son suffer for past mistakes. So they decided to do something about it. 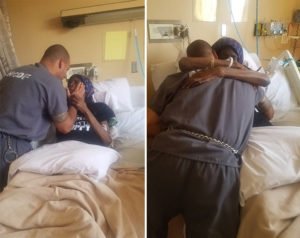 The police officers at the Sonoma County Sheriff’s Office in Santa Rosa, California found out that the mother of one of their inmates had little time left in this world, so they decided to drive the inmate son to go see his mother one last time. The inmate’s mother was in a hospital, and they escorted the inmate all the way there so he could say his goodbyes and share his thoughts with his mom. The mother was so touched by the gesture that she even asked if she could give one of the officers a hug. It was an emotional day for everyone, even the police officers that were there for security. 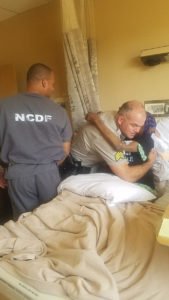 “This morning our Transportation Unit got to share in something very special,” the department wrote on their official Facebook page. “We were honored to escort this inmate to visit his mother who is in hospice care. It was a beautiful, special moment. One we won’t soon forget. His family sent us these pictures we took with them and wanted us to share with everyone. What a great experience. It was really touching.”