In most cases, the arrival of police officers means that whatever was going has come to an end. But in this particular situation, it was actually the opposite, much to the surprise of a group of small citizens that were involved. In Janesville, a neighbor called the police on a group of kids who blocked off a section of the road to play a little street hockey. It seems the neighbor had been concerned for the ‘safety’ of the kids. Â But what happened next surprised these children. 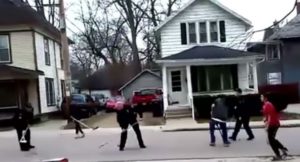 Instead of dispersing the group of kids, the police officers who had responded to the call instead blocked off an even bigger area of the street and played street hockey with the kids. They played a short game of 3-on-3 with the police officers matching up against the kids. After the friendly game, the Janesville police officers huddled all the kids together and told them of other areas where they could play that would be safer from traffic (and free from the prying eyes of kill-joy neighbors). 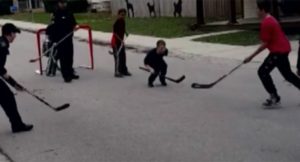 According to the Janesville Police department, they encourage their officers to connect with civilians, including kids, to build community trust and cooperation. They applauded the actions of their police officers, whose photos and videos of them playing road hockey with the kids has since gone viral. The police officers also stated that they were there to serve and protect the community, even it means enjoying an afternoon of street hockey with the local kids.